Kibitzing about our favorite Jewish recipes and food

You are here: Home / All Recipes / Gluten-free / 8 Different Gluten-free Latkes – A Recipe for Each Night of Hanukkah

Below are 8 of the best gluten-free latkes recipes we can find, perfect if you want to vary the tradition a bit each night of Hanukkah.

Eight gluten-free latkes recipes for eight nights of Hanukkah. If you are a fan of latkes, but also like a bit of variety, we have a huge treat for you. The first is our personal favorite, a family potato latke recipe passed down and converted to create gluten-free latkes.

Latkes are often called potato pancakes, and technically, that is what they are. However, there are some differences. Traditional potato pancakes are rounder and thinner, while latkes are defined by their more coarse appearance and thicker texture.

However, like many traditions, the lines between latkes and potato pancakes have blurred a bit. To simplify, the potato pancake fried in oil and served at Hanukkah is called a latke.

Latkes are potato pancakes that are fried in oil and eaten during Hanukkah.

Why are latkes eaten at hanukkah?

Hanukkah is the only time of the year I can think of when we are encouraged to eat fried foods. After all, oil plays a significant role in the holiday. For it was one day’s worth of oil that burned for eight days after the second Temple of Jerusalem was destroyed that makes the miracle of Hanukkah.

The oil used in preparing these fried latkes is often thought of as a symbol of the Hanukkah miracle.

Are all latkes gluten-free?

On this page, we feature only gluten-free latke recipes, but traditionally, they usually contain gluten. In fact, the most common ingredients of latkes are potatoes, onions, eggs, and flour (or matzah meal).

How to eat gluten-free latkes

Latkes are typically served hot with apple sauce or sour cream, whether they are gluten-free or not. Apple sauce, while being delicious with the potato pancake, also helps cut the oiliness.

We have seen at restaurants (and even ordered) latkes with slices of smoked salmon and a dollop of sour cream. There is also a twist on this in the recipes below.

I also know people who sprinkle cinnamon on top, but the closest I have come to trying this was topping them with cinnamon apple sauce. And then there is ketchup, something that might appeal to those who dip their fries, but it’s not for me. Easy to prepare, these delicious gluten-free potato pancakes are an alternative version of my grandma's traditional Hanukkah latkes. They are what we eat every year, although they usually don't come out as "perfect" looking as they do in the image. Herbed vegetable potato pancakes are perfect for brunch, party appetizers, or a side dish. Top them with smoked salmon and lemon-chive cream for an elegant appetizer. These scallion potato pancakes have lacy crispy edges and tender centers. The scallions add an onion flavour that seems to compliment the crispyness. A favorite you won't want to miss. These healthy baked spinach artichoke latkes are naturally vegan and gluten-free. They are a cinch to make and a perfect party appetizer or meal. These extra crispy latkes are naturally gluten-free. Instead of flour, they use the starch from the potatoes. Serve with sour cream and apple sauce. These easy, crispy, oil-free latkes are made right in your air fryer! This air fryer gluten-free vegan potato latkes recipe is top 8 allergy-free, paleo, and ready in 10 minutes. Keep them traditional for Hanukkah or add a touch of smoked paprika for a flavorful dinner side dish any night. Photo Credit: www.justbeetit.com
Beetroot and sweet potato latkes are a twist on traditional latkes, utilizing nutrient-dense root vegetables such as sweet potatoes and beets, and offering a vegan and gluten-free option. Keeping the traditional taste, these latkes are seasoned with garlic, onion, and black pepper, a fabulous pairing with the natural starchy sweetness from beets and sweet potatoes!

As an Amazon Associate and member of other affiliate programs, I earn from qualifying purchases.

You can get a gluten-free potato pancake mix from Manischewitz. Honestly, we have never tried it, and I don’t think we will, as making latkes from scratch is a family tradition. However, everything we have tried from Manischewitz has been fine. Check it out here.

Which gluten-free latke recipe will you try first?

More on Hanukkah at Kibitz Spot: 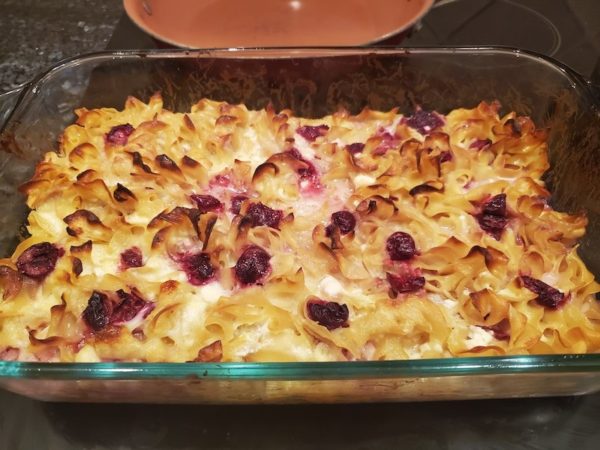 Cherry Kugel: An Easy Holiday Treat that Has Everyone Asking for More Our Jewish Penicillin Recipe is a Gluten-Free Chicken Soup

This website uses cookies to improve your experience while you navigate through the website. Out of these, the cookies that are categorized as necessary are stored on your browser as they are essential for the working of basic functionalities of the website. We also use third-party cookies that help us analyze and understand how you use this website. These cookies will be stored in your browser only with your consent. You also have the option to opt-out of these cookies. But opting out of some of these cookies may affect your browsing experience.
Necessary Always Enabled
Necessary cookies are absolutely essential for the website to function properly. These cookies ensure basic functionalities and security features of the website, anonymously.
Functional
Functional cookies help to perform certain functionalities like sharing the content of the website on social media platforms, collect feedbacks, and other third-party features.
Performance
Performance cookies are used to understand and analyze the key performance indexes of the website which helps in delivering a better user experience for the visitors.
Analytics
Analytical cookies are used to understand how visitors interact with the website. These cookies help provide information on metrics the number of visitors, bounce rate, traffic source, etc.
Advertisement
Advertisement cookies are used to provide visitors with relevant ads and marketing campaigns. These cookies track visitors across websites and collect information to provide customized ads.
Others
Other uncategorized cookies are those that are being analyzed and have not been classified into a category as yet.
SAVE & ACCEPT
498 shares