You are here: Home / Kibitzing / What is the Meaning of Kibitz and Why Are We Kibitzing?

What is the Meaning of Kibitz and Why Are We Kibitzing?

by Esther Rosenblum // Leave a Comment
We may earn a commission through links on this site at no extra cost to you.

Since we started Kibitz Spot, the question we get most often is asking for the meaning of kibitz. The short answer is that it’s a Yiddish word without a literal English translation. While some say kibitzing is gabbing, chitchatting, babbling, or gossiping, it’s more frequently used to describe one who is meddling into someone else’s business.

Here at Kibitz Spot, we make light of it. To kibitz is to make random conversation, to share a bit of Jewish fun and food – especially recipes. That’s all. It’s not political, religious, or intended in any way to offend anyone. Just to kibitz.”

Recently I stumbled upon another definition, then another, and soon I began collecting them.

Kibitz vs Kibbitz (which spelling is correct?)

Before we get to the true meaning of kibitz, we should agree on the spelling. Originating in a different alphabet, and phonetically spelled in English, we have seen it with both one and two “bs.” To be clear, that is not BS, but rather the plural of the letter B as it appears in the word “kibbitz” or “kibitz.”

As it turns out, both are perfectly acceptable spellings. Therefore, we had to make an arbitrary decision.

For use on this website, “kibitz” has only one “b”
and is therefore spelled: k-i-b-i-t-z.

Without further kibitzing about kibitzing, let’s get to the matter at hand.

What is the meaning of kibitz?

Like so many Yiddish words and expressions, there is more than one way to interpret it. You have already seen our definition, but here are some others:

Kibitz according to the Yiddish Slang dictionary it simply means “giving unwanted advice.” But they expand adding that while it originally was meant to converse idly, “in the United States grew to have the negative connotation of giving unwanted advice, usually about someone’s card game. A kibbitzer is a gossiper.“

Similarly, Macmillan Dictionary says to kibitz is to “watch and make annoying comments about something that someone is doing.” Or a snarkier definition by Stacy Knows is simply “verbal joking”

According to the Daily Writing tips, “In Yiddish, it’s spelled kibets, and it’s related to the Hebrew “kibbutz” or “collective.” But it can also mean verbal joking, which after all is a collective activity. It didn’t originally mean giving unwanted advice about someone else’s game – that’s an American innovation.

Where as Urban dictionary, rarely a good source of information, says “the common meaning of kibitzing is a person who is being extremely lazy and generally not doing what they should be. kibitzing can sometimes be determined by the way someone is sitting/laying.“

A few synonyms for kibitz

Examples of a kibitzer: using kibitz in a sentence

Have you ever played cards, say Go Fish (we are family friend site) when someone stands behind you, looks at your cards, and says “Oh, fabulous, you will do great with all those threes.”

Here are a few more examples:

From Shmear To Eternity: The Only Book of Yiddish You’ll Ever Need by Fred Kogos
An update from the popular title “A Dictionary of Yiddish Slang and Idioms” from the same author, this book is more of a dictionary than a story. Quite complete, it often will leave you laughing.
Check price at Amazon.

Born to Kvetch: Yiddish Language and Culture in All of Its Moods by Michael Wex
A treasure trove of linguistics, sociology, history and folklore, its more about kvetching and the Yiddish language, than actually being about kibitzing. A serious, yet funny look at all we have to kvetch about from curse words, food, sex and even death.
Check price at Amazon

Or, Click here for an on-line dictionary of Yiddish.

Or, for more on languages, don’t miss our review of Pimsleur – where you can learn any of 50 languages including Hebrew.

This one isn’t mine, but worth a listen. I’ll admit, the first part of this video is quite serious, as the speaker’s Nana passes away. Starting at 1.30, in honor of his nana, are 15 solid minutes of nana’s Jewish jokes. While the moderator’s favourite joke starts at 3.38, my favorite starts at 14.30.

Note of warning: Some of this humour is in very poor taste. 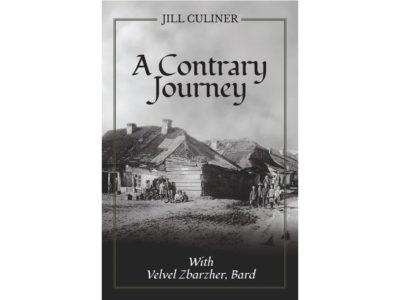 New book on the Jewish Enlightenment: A Contrary Journey by Jill Culiner

This website uses cookies to improve your experience while you navigate through the website. Out of these, the cookies that are categorized as necessary are stored on your browser as they are essential for the working of basic functionalities of the website. We also use third-party cookies that help us analyze and understand how you use this website. These cookies will be stored in your browser only with your consent. You also have the option to opt-out of these cookies. But opting out of some of these cookies may affect your browsing experience.
Necessary Always Enabled
Necessary cookies are absolutely essential for the website to function properly. These cookies ensure basic functionalities and security features of the website, anonymously.
Functional
Functional cookies help to perform certain functionalities like sharing the content of the website on social media platforms, collect feedbacks, and other third-party features.
Performance
Performance cookies are used to understand and analyze the key performance indexes of the website which helps in delivering a better user experience for the visitors.
Analytics
Analytical cookies are used to understand how visitors interact with the website. These cookies help provide information on metrics the number of visitors, bounce rate, traffic source, etc.
Advertisement
Advertisement cookies are used to provide visitors with relevant ads and marketing campaigns. These cookies track visitors across websites and collect information to provide customized ads.
Others
Other uncategorized cookies are those that are being analyzed and have not been classified into a category as yet.
SAVE & ACCEPT
132 shares