Kibitzing about our favorite gluten-free recipes

You are here: Home / All Recipes / Gluten-free / Gluten Free Vegan Recipes / How to Peel or Cut a Pumpkin: Use Fresh Pumpkin in Recipes

How to Peel or Cut a Pumpkin: Use Fresh Pumpkin in Recipes

by Jeff Albom // 6 Comments
We may earn a commission through links on this site at no extra cost to you.

Using fresh pumpkins as an alternative to the canned variety is simpler than most people think. Once we learned a few tricks, we found out it’s easy to cut a pumpkin, and even easier to peel a pumpkin. Read on and see if you agree.

Pumpkin is a popular fall squash that is versatile and inexpensive. Cutting and peeling a pumpkin for use in various recipes can be a daunting task but you can tackle it with these simple steps.

We are surprised to learn that many of the people who prefer fresh pumpkins are intimidated by their lack of knowing where to start. While it’s true that sometimes the most difficult part of enjoying a pumpkin is cutting it open, the steps below will resolve that for you.

Are you wondering when you would use a fresh pumpkin?

If you cut the pumpkin, then roast and puree it, you can substitute it one for one with canned pumpkin in any recipe. We use it in some soups, pancakes, dinner mains, cakes, and of course, pumpkin pie.

Often we like to serve roasted pumpkin cubes as a side dish or make a hearty soup. For these recipes, we need to peel the pumpkin after we have cut it in half. This straightforward process is also outlined below.

Importantly, edible pumpkin varieties are a healthy addition to mains, sides, and even desserts.

The pumpkins we eat are generally different from the ones used as Halloween jack-o-lanterns. However, you can use the method below to cut the pumpkin.

Types of pumpkin for eating

The definition of a pumpkin seems to vary quite a bit, often including a variety of winter squashes. After doing a bit of reading, we believe this list from Gardening Know How is a great representation of the best pumpkins for eating (and cooking).

Disclaimer: Statements regarding health benefits are not intended to diagnose, treat, cure, or prevent any disease or health condition.

Pumpkin is low in calories while being rich in vitamins A and C, beta carotene, potassium, fiber, and antioxidants. According to Healthline, it also may protect eyesight, boost immunity, lower cancer risk, and promote healthy skin.

How to cut and peel a pumpkin

What you need to peel or cut a pumpkin

Instructions to peel and cut a pumpkin

Wash and clean the pumpkin with water and a vegetable brush.

2. Pierce and cut the pumpkin

Place the pumpkin, stem side up, on a sturdy cutting board and pierce the skin next to the stem with a sharp broad blade knife. Push the knife as far into the pumpkin as it will go. It does not have to pierce the opposite side.

While holding the pumpkin, use the knife handle to rotate the blade down through the side of the pumpkin towards the cutting board.

3. Cut and separate the halves and remove the seeds

Remove the knife from the pumpkin and insert it in the opposite direction so you can slice through the other side of the pumpkin.

Scoop the seeds out of the pumpkin. While you could discard these, we like to roast the pumpkin seeds.

Place one of the half pieces flat side down against the cutting board and using a sturdy vegetable peeler, proceed to remove the skin from the pumpkin’s surface. You will have to change directions and angles or hold the pumpkin half on its side to remove all the skin.

Repeat for the second half of the pumpkin.

More on cutting a pumpkin

This technique can be used on most pumpkin varieties.

Pumpkins can have a very long shelf life (months, depending on variety).

An added benefit of using a whole pumpkin is that you can scoop the seeds from inside and roast them for a tasty and healthy snack.

Do you now have the confidence to peel and cut a pumpkin? 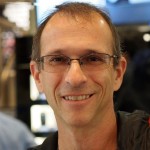 Jeff is a passionate foodie, with a talent for creating recipe variations from scratch. Jeff grew up in Brooklyn, New York, and as a world traveler, he has developed a discerning palate. Jeff and his wife currently reside in New Zealand.

This website uses cookies to improve your experience while you navigate through the website. Out of these, the cookies that are categorized as necessary are stored on your browser as they are essential for the working of basic functionalities of the website. We also use third-party cookies that help us analyze and understand how you use this website. These cookies will be stored in your browser only with your consent. You also have the option to opt-out of these cookies. But opting out of some of these cookies may affect your browsing experience.
Necessary Always Enabled
Necessary cookies are absolutely essential for the website to function properly. These cookies ensure basic functionalities and security features of the website, anonymously.
Functional
Functional cookies help to perform certain functionalities like sharing the content of the website on social media platforms, collect feedbacks, and other third-party features.
Performance
Performance cookies are used to understand and analyze the key performance indexes of the website which helps in delivering a better user experience for the visitors.
Analytics
Analytical cookies are used to understand how visitors interact with the website. These cookies help provide information on metrics the number of visitors, bounce rate, traffic source, etc.
Advertisement
Advertisement cookies are used to provide visitors with relevant ads and marketing campaigns. These cookies track visitors across websites and collect information to provide customized ads.
Others
Other uncategorized cookies are those that are being analyzed and have not been classified into a category as yet.
SAVE & ACCEPT
144 shares